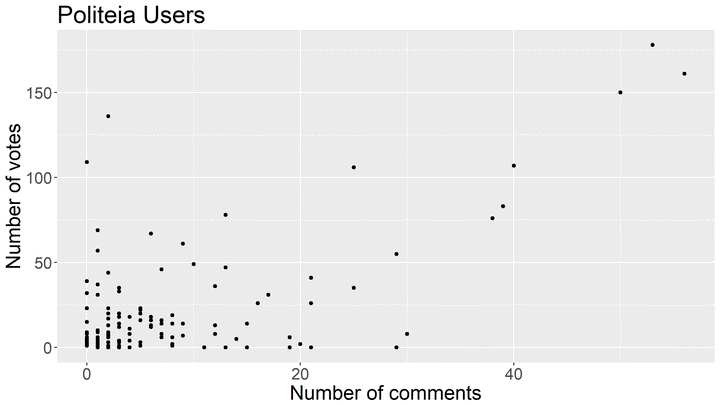 The Politeia API has recently been extended to allow user IDs and names to be looked up from public keys (proposals, comments and up/down votes are associated with public keys in the Pi data).

Here is a table which records all Pi users who have acted (commented or voted at least once), there are 154 users in the set.

There follows some high-level analysis of the data as it was on 30 July 2019 (this commit).

The number of votes (mean 22.6) and comments (mean 7.7) per user is highly skewed and follows a power law type distribution whereby a small number of highly active users account for a large proportion of activity. This kind of distribution is common to more or less all online social platforms.

In general there is a correlation between no. of comments and votes, but there are also users who are mostly active in just one of those ways. 32% of Pi users only commented (17%) or voted (15%),and did not do the other action at all.

280 votes (7% of total) came from users who have never commented, and who are therefore invisible on the proposals site.

Thanks to @s_ben for implementing the API endpoint that allows user IDs and names to be retrieved, and to @lukebp for helping me figure out how to process a series of up/down votes and revocations by the same user to arrive at the same conclusion as the Pi server about how they ultimately voted. Every time a user clicks those up/down voting buttons this is recorded in the repository as an action, and the server figures out the current state by processing those actions in sequence.