Year three of Decred's Politeia in numbers and graphs 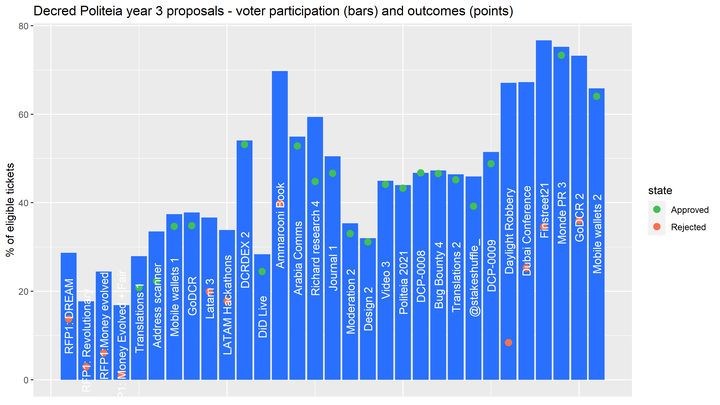 This report presents an overview of Politeia activity data for the third year of its operation (Oct 16 2020 to Oct 16 2021).

The participation rate has shifted upwards considerably since years 1 (mean 31%) and 2 (mean 28%), and the standard deviation or spread is also larger, although as we will see later there is a temporal dimension to that. There were only two proposals which failed to meet the 20% quorum requirement, and both of them were RFP responses right at the start of the year in question.

The approval rate of proposals became much more extreme in the third year, with more proposals getting close to 100% approval and those which didn’t tending to have quite low approval. The mean approval rate is a little lower at 74% than the previous 79%, whereas the proportion of yes votes has increased to 72% (from 54%). This counterintuitive pattern is a result of high turnout for proposals that got close to 100% approval, with lower turnout for proposals that did not fare well in voting.

This is based on my own quick categorization of the proposals. The domination of marketing proposals has reduced, and there were more software development proposals in the third year, so that these rival marketing as the most common type.

The approval rate for software development proposals is high, for marketing related proposals it was around 50%.

When we consider the scale of the proposals’ budgets, the action has swung even more significantly towards software development.

The proportion of proposals from people who are already contractors has gone up (from 48% in year 2) to 77%, and in the last year there has only been one proposal from a non-contractor which was approved.

The software development proposals are getting more numerous, their budgets are getting bigger, and a lot of them are getting strong approval from voters.

This graph shows the temporal dimension to the turnout variability. After a sluggish start with low turnout for the decred.org RFP proposals, voter turnout really picked up, after it crossed the 40% threshold it went on to set new records, and turnout below 40% became rare.

With three years of usage and data built up, the attitude of the voting Decred stakeholders towards different types of proposal seems quite clear, but it also feels like it’s developed to be that way over time. Let’s see if there are any trends in the data which accompany this development.

From this perspective, it looks like a lot of the (mostly marketing) proposals which tended to get low approval have dried up.

This one has the same data but reverses the y axis and size of the points, it shows a drop in participation after the earliest proposals, then for 2019 and 2020 most of the proposals were in the 20-40% voter turnout range, but since early 2021 the turnout rate has shifted upwards.

Stats for Politeia at 3 years: