One year of Decred's Politeia in numbers and graphs 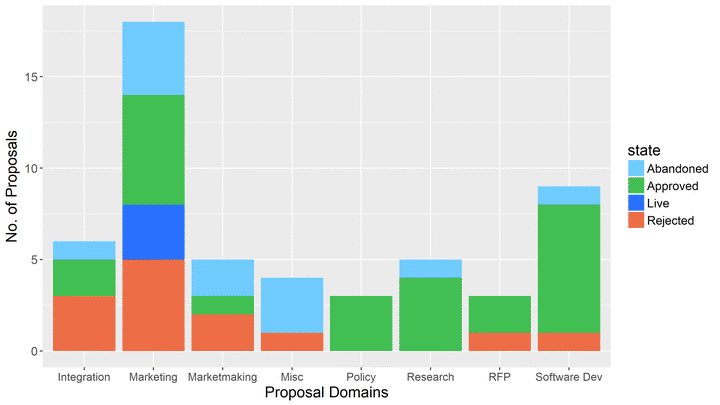 There is yet to be a proposal with less than 20% voter turnout, probably related to the minimum quorum requirement of 20%. Above the average the distribution is more stretched, with a number of proposals having >40% turnout and the first Ditto proposal breaking 50%.

This is based on my own quick categorization of the proposals. Aside from a lot of marketing proposals there is a roughly even mix of other types.

The next chart presents the same information but broken down by whether the proposal author was a contractor at the time of the proposal’s submission.

It is interesting to note that there are quite a few proposals from people who were already a contractor when they submitted the proposal, around 35% of proposals are from contractors. Proposals from contractors are also more likely to be approved. This is I think quite illustrative of one side of Politeia, where it serves as a way for the stakeholders to give their continued backing to the contractors who are active in important areas of the project. When contractors reach a point where they need to make a proposal about something, stakeholders are usually supportive of those proposals (e.g. DEX, Marketing and Events budgets).

This scatterplot shows all the proposals, positioned according to their turnout and approval, size determined by max cost and colored by domain. It does not include Abandoned or Live proposals.

The cost data is quite weak because there are often contingencies within proposals where the amount that is eventually billed for depends on some unknown factors (usually how long it takes to finish something). I have assigned maximum dollar costs to proposals based on reading the proposal and calculating (roughly) the most expensive scenario.

More expensive proposals tend to relate to projects that specify a longer timeline for delivery, unsurprisingly. The graph above excludes 2 proposals from REUM that requested budgets in excess of $1 million, one for a duration of several years - the first of these was rejected with 4% approval, the second was abandoned.

The votes on comments tend to come in a little more slowly, with 20% within the first 2 days after a proposal is published, 42% within 5 days and 72% within 10 days.

To finish up the report there is a copy of the proposal outcomes ordered by time graph and the top Politeia contributors table.

Politeia makes user commenting and up/down voting data publicly available. Below are the top 30 users ordered by comments score (they had the most upvoted comments) in Politeia’s first year. Full table here.